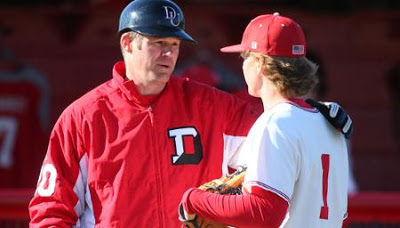 Today we share a guest post from our friend and Denison Baseball Head Coach Mike Deegan. We’re thankful for his leadership and partnership with our team.

A longtime baseball scout was attending a banquet when a baseball lifer approached him. This person played professionally, managed, and dabbled in the front office. Tough and rugged- the man had a reputation as being abrasive, passionate and honest.

On this particular night, the ex-skipper cornered the scout and asked him when his organization was going to draft his son. The scout, who thought his son was a late round draft pick at best, tried dodging the question. “Ah Skip, he’s a nice player. I’m sure someone will pick him up.” To this he replied, “Nice player? He’s the best catcher in the draft. He’s way better than that kid from Vegas.”

That “kid from Vegas” was phenom Bryce Harper.

Dad Goggles- “the tendency to think your child is way better than they really are.”

Being a coach, I get to witness this phenomenon regularly. If I’m watching a high school game a dad will ask, “How hard is he throwing?” After looking at the unbiased radar guy I reply, “76-78 mph.” Dad often chimes in, “no way….he throws harder than that.” Ah…ok.

During the recruiting process dads often rave about their sons work ethic. “He’s the hardest worker.” I know dad googles are at play; if their son is the hardest worker there’s zero reason to say it. That type of behavior is legendary. It will speak for itself.

If you are reading this and you are a father there is a 97% chance you have the goggles. It’s ok. In the majority of cases dad goggles are harmless and even endearing at times. Just admit you’re nuts when it comes to your kids. Everyone understands. The condition only becomes threatening when you lack self-awareness and begin putting undue pressure on the child.

Dad goggles are fine. My concern is what I have: “Coach Goggles.”

Coach Goggles: “the tendency to judge and pick everything apart. Being overly critical; lacking appreciation.”

My greatest strength is my obsession with continuous improvement. It’s also my greatest weakness. I think I stink at everything. In my mind, I haven’t accomplished anything. It’s a gift and a curse. It motivates me to keep working and growing. However, it can be damaging to happiness and fulfillment. Luckily, I’ve learned to manage this for myself. What I worry about is how it affects my children.

I have witnessed Dad Goggles so many times that I wanted to make sure I never had them. I didn’t want to be the dad bragging and the person listening going, “Oh boy. What is he talking about?”

You mix being a coach, striving for continuous improvement, and my adverse relationship with dad goggles and you have the recipe for a tough childhood for my kids. I rarely give them credit. They play good….I see 10 things they could have done better. Another parent compliments me on their kindness…they are just doing what they are supposed to do.

If you possess dad goggles you are fine. Just realize your kid isn’t as good as you think they are. The world likely sees them differently than you do. Don’t worry, you are in good company- even Major League baseball royalty owns a pair.

If you are like me and have the coach’s goggles be careful. Our kids don’t need our judgment and insecurities placed on them. It kills confidence. More importantly, it can kill the relationship. We can’t let that happen.

While his on-field accolades could surely fill a case or two, Deegan’s proudest accomplishments haven’t been rewarded by a trophy. His greatest achievements aren’t about home runs and he won’t tell you a story about that perfectly timed pitching change or a late inning pinch hitter. For Coach Mike Deegan, it’s all about people.

Baseball teams, like any organization, are successful at the intersection of strong leadership, a team-centric approach and a positive, organically developed culture. This formula of success extends well outside the lines of chalk and, in searching for an avenue to share these strengths in businesses, schools and other organizations, Mike’s naturally magnetic personality and speaking style stand out amongst the crowd.

If you want to talk “X’s and O’s,” it could be arranged, sure, but Coach Mike Deegan’s speaking opportunities are focused on the needs of your organization and he will leave the impactful, memorable mark you seek.

A father of four, Mike and his wife Lowrie reside in Granville, Ohio, where Mike leads the Denison University Big Red baseball program.