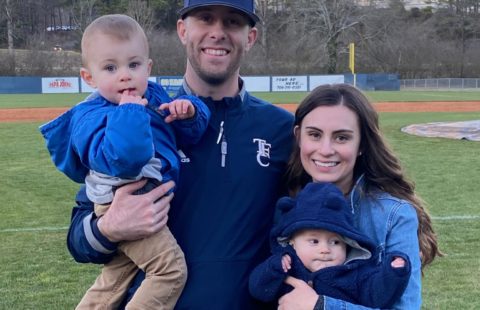 Jackson went on to say “it’s not easy to find true sports professionals and former athletes who know how to train athletes and who can connect with kids, parents, and recruiters in the way that we expect. We have this unique combination in our latest hire.” We are excited to announce Justin Brown as our new Director of Baseball Development and Leadership.

A native of Columbus, Ohio, Brown has spent the last seven years coaching collegiate baseball including the last four years as head coach at the NCAA Division III and NAIA levels.

After a playing career at Mount Vernon Nazarene University that began as a walk-on tryout and culminated with being named a first-team all conference and region selection, Brown was hired as an assistant coach for NAIA Hall of Fame coach Keith Veale. From 2013-2016 he served as the pitching coach and recruiting coordinator at MVNU. Before moving on to head coaching opportunities at North Central University in Minneapolis, Minnesota and Toccoa Falls College in Toccoa Falls, Georgia.

In total Brown has coached three players who have advanced to professional baseball including Nick Thwaits who was selected in the 15th round of the 2018 MLB draft by the San Diego Padres. He has coached one NAIA All American and fourteen players who have received all-conference or all-region selections.

Alongside his coaching experience, Brown has extensive scouting experience in multiple regions of the country. He served as the Ohio Assistant Director of Scouting for Prep Baseball Report before moving out of state.

He is twice a graduate of Mount Vernon Nazarene University earning his bachelor’s degree in 2013 and his Master’s degree in 2017. He is twice the recipient of the NAIA Champions of Character Award. An award given to just 45 NAIA athletes nationally each year – (2012, 2013).

Brown met his wife Ashley while they attended MVNU. The couple married in 2014 and have two boys, Judah (2) and Jacoby (1).

Bo Jackson’s Elite Sports Senior Sports Director Neal Packanik said – “We are excited to add Justin to our team. His experience as a college coach and his passion for leadership development will allow us to continue to develop well rounded athletes. This is a home run addition to our staff.”

Bo Jackson’s Elite Sports opened its first location in the Chicago area in 2008 and it’s Columbus location in 2017. The 114,000 + Sq. Foot facilities train athletes of all levels of ability from learn-to-play through to elite level athlete development. The facilities feature a wide range of training environments, leadership and character training, corporate and youth group teambuilding and programming in soccer, lacrosse, baseball, football, and softball.